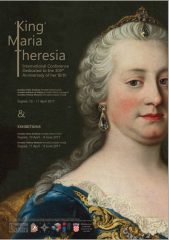 Matrimonial Arrangements in the Service of Prestige, Social and Political Connections, Public and Military Services, and the Material Wellbeing of Croatian Noble Families during Maria Theresia’s Reign
This paper discusses the social and political importance of favourable familial arrangements and connections in the service of Queen Maria Theresia and her State with its administrative and military bodies.
The topics will be elaborated by using the example of the marital strategy of Suzana Malatinszky, one of several sisters born in a noble family of humble descent. Her favourable marriages, first with the count and general Ivan Kazimir Drašković and especially the second one with the Croatian ban Ferenc Nádasdy, enabled her to improve her family’s prosperity in the society, as well as to arrange advantageous marriages for her younger sisters. These marriages, and the family connections thus created between the noble families of Nádasdy, Drašković and Vojkffy, affected especially the spouses of these women (some positively and others rather negatively) regarding their prestige, social status, and chances in public and military service.
The paper is based on eighteenth-century sources related to the Vojkffy family. It also uses Baltazar Adam Krčelić’s view of the everyday life of nobility in Civil Croatia in the mid-eighteenth century as described in his Annuae, as well as modern scholarship on the Early Modern European and Croatian nobility.
„M. Theresia: Infelix, sed adhunc tamen meo dignus amore Filius“: A view on Maria Theresa’s opinion of Joseph the Second regarding his policy towards Hungary according to Joseph Keresturi’s writing
According to the testimony of Joseph Voltić, an eyewitness, the city of Vienna in the 1780s was “flooded” with various publications of worthless content. Voltić pointed out the lack of erudition as well as the ignorance and mockery of Latin language, as well as derision of abbots – but most of all he drew attention to the fact that anyone could comment on anything. The problem escalated to the point where Voltić suggested that a committee should be established with the purpose of controlling the writings and of selecting what should be allowed or not allowed for publication. Nevertheless, in the same letter Voltić underlined that in the contemporary Vienna there were many wise and educated writers, among them a “Josephus Kerestury Hungarus – a royal agent, poet, educated layer and historian.”
Josip Keresturi, the „Croata Stridonensis“, attended the ratio studiorum as a young Jesuit. In those circumstances, this meant that Keresturi was educated in an institution that aimed at a constant improvement of linguistic expression in Latin, a practice heavily criticized and ironized by his contemporary, Balthasar Adam Krčelić. Keresturi’s writings – including comments of a two-volume collection of legal provisions, a detailed historical and juridical discussion on insurrection, and various literary writings in the form of dialogues in which he commented on the socio-political constellation following the death of Joseph II – definitely testify that he was a widely educated humanist author.
Having left the Jesuit order, Keresturi first completed his legal studies. His first appointment was to the office of a ordinarius notarius in Varaždin at the time when the Croatian Royal Council (Consilium regium Croaticum) was being established. As a member of various committees, Keresturi had an opportunity to get acquainted with the reforms introduced by the Royal Court in Vienna as well as the political elites of his time. In 1771, he became an agens aulicus at the Hungarian Royal Chamber (Cancellaria Hungarico-Aulica) in Vienna, and he stayed in that office for the next twenty years. Since the Hungarian Royal Chamber mediated between the Royal Court in Vienna and the lands of the Crown of St Stephen, Keresturi was very well acquainted with the royal policy towards Hungary – he was in medias res, so to say. During that period, which lasted for twenty years, he was the editor of Ephemerides Vindobonenses, a journal published twice per week in Latin. This journal brought political, cultural, economic, and various other news from the Monarchy (especially from Croatia) and Europe, as well as reports on the royal reforms and other activities undertaken by Maria Teresa and Joseph II.
Immediately after the death of Joseph II in 1790, Keresturi published a wok of literary and political fiction entitled Josephus II in Campis Elysiis. Somnium Eleutherii Panonii, under the pseudonym of Eleuterius Panonius (“the free Hungarian”). In his foreword to this work, Keresztúri presented his hypothesis and concept, but he also vividly depicted the bitterness of the Hungarian Estates resulting from the reforms introduced by Joseph II and the tensions in Hungarian society after the Emperor’s death. Furthermore, Keresturi presented himself as Hungarus Author in order to emphasize the fact that he himself was a member of the Hungarian Estates, and also recommended to the reader to think before their final verdict concerning the Emperor’s intentions and deeds. Emperor Joseph’s reign is explored via his dialogues with his mother (Colloquium I-IV), all symbolically taking place under the shadow of the late Hungarian kings in the Elysian Fields. The fifth chapter presents a debate among the late Hungarian kings, some accepting and praising the Emperor’s policy towards Hungary, others rejecting and condemning it. Keresturi decided to use the form of dialogue between Emperor Joseph II and his mother Maria Teresa “in order that the truth should be better illuminated when contrasted to the discussion of shadows” (quod mutuis umbrarum colloquiis veritas magis illustrari). The ideal starting point for estimating the character of Maria Teresia is the actual perspective of the Hungarian Estates. Thus, she becomes an advocata Hungariae and, although her discords are not unambiguous, Keresturi presents them in opposition to Joseph’s reforms, which makes Maria Teresa a queen who had idyllic relations with the Hungarian Estates. Therefore, it is obvious that the wording of his title primarily serves to communicate the massage that Emperor Joseph’s intentions towards Hungary were not to be condemned.