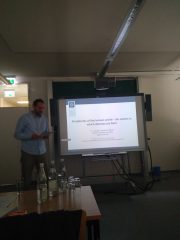 Sažetak: In this paper I would like to point to Croatian tradition beliefs in pasoglavci (cynocephaly) which are strongly present in 19th century narratives. Pasoglavci are mentioned as dog headed savage creatures that come from non-Christian east, thus being connected to Ottomans, Mongols or Huns. Nonetheless, similar images of dog headed creatures, or those resembling humans with some physical distortions, can be found all across Europe from antiquity to modern days. Such beings were usually encountered during contacts between Europeans and people living beyond known borders and cultures. Therefore in this paper I will argue that images of demonic creatures were constructed as a result of cultural ignorance of Europeans who described incomprehensible cultural practices as demonic, turning some people of distant territories in demons. Although some existent cultural dissimilarities served as basis upon which demonic images were constructed, I would also like to point to mechanism of othering which allowed Europeans to demonize other ethnic groups in order to gain superior positions upon them. Such superior, comfortable positions, allowed Europeans to combat, exploit and even enslave other nations and ethnic groups.