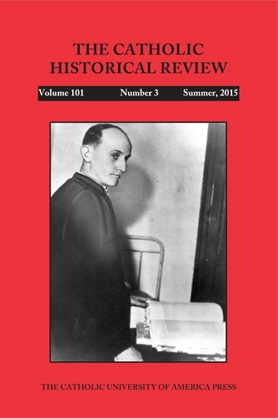 The American historian of Jewish descent, Dr. Esther Gitman Ph.D., has published in the Summer Edition of the scientific journal The Catholic Historical Review (CHR), third this year (pp. 488-529, vol. 101. n. 3), an article about the blessed Alojzije (Aloysius) Stepinac, titled Archbishop Alojzije Stepinac of Zagreb and the Rescue of Jews, 1941-45.

In the article, the author shows how the Archbishop of Zagreb undertook the action of rescuing several hundred of individuals associated with the Croatian Jewish community, how he saved more than a thousand Jews who were in mixed marriages, as well as many others for whom the Nazi regime posed a danger.

Using evidence from various archives, testimonies of surviving family members and other documents, the author discusses how Stepinac responded to the politics of the Ustasha regime under the Nazi and Fascist patronage, and how he used his position in the Church to promote the rescue of Jews. In the same article, the author talks about the collaboration between Archbishop Stepinac and Msgr. Giuseppe Ramiro Marcone, Pope Pius XII’s apostolic visitor, and how they demanded from the Vatican that the Jews who had arrived into the Italian zone not be deported back to NDH (Independent State of Croatia).

The scientific journal, The Catholic Historical Review, had decided to publish Dr. Gitman’s article only after the article had been subjected to double-verification by two of our professional associates who did not know who the author of the article they were verifying was. The verifiying associates were four scientists of high international reputation from Croatia and abroad. Dr. Gitman was able to provide adequate answers to all criticisms and complaints put by the verifiers and substantiate her claims with evidence from the archives. Some complaints were irrelevant to the subject of the article and, hence, we did not seek any clarification for them. Dr. Gitman’s article contributes significantly to discussions regarding the role of Archbishop Alojzije Stepinac of Zagreb during the difficult years of World War II. The Catholic Historical Review is, therefore, very happy to be in the position of making that article available to the scholarly world. By placing the image of Archbishop Stepinac in prison on the cover of the summer issue we wanted to draw attention to this important person in the history of the Catholic Church in the 20th century – said Professor Nelson H. Minnich, editor of The Catholic Historical Review and a professor at the Department of History, the American Catholic University.

This article is yet another in the list of articles that, based on facts, show how much Cardinal Alojzije Stepinac was engaged in the defense of the dignity of every person during the difficult times of the Second World War.

Dr Esther Gitman earned her doctorate at the City University, New York and the findings of her research are summarized in her book “When Courage Prevailed,” translated into the Croatian language and published by Christian Actuality in 2011. The book deals with the topic of the rescue and survival of Jews in NDH (Independent State of Croatia) and one of its chapters is devoted to the role played at the time by the Archbishop of Zagreb, Alojzije Stepinac. The author deals with issues related to Jews in Croatia during World War II and, using scientific evidence and historical facts, she points to the uniqueness and the greatness of Cardinal Alojzije Stepinac in all those events.

She was a visiting professor at the Catholic University of Croatia during the 2013/2014 academic year 2013/2014. and held a course on rescuing Jews in NDH (Independent State of Croatia).