Leadership of the Catholic University of Croatia

At the proposal of Rector Tanjić, the Senate of the Catholic University of Croatia confirmed the new Vice-Rectors at its 54th session of the 2019-2020 academic year held on 15 September 2020. The new Vice-Rectors assumed their office effective 1 October 2020. 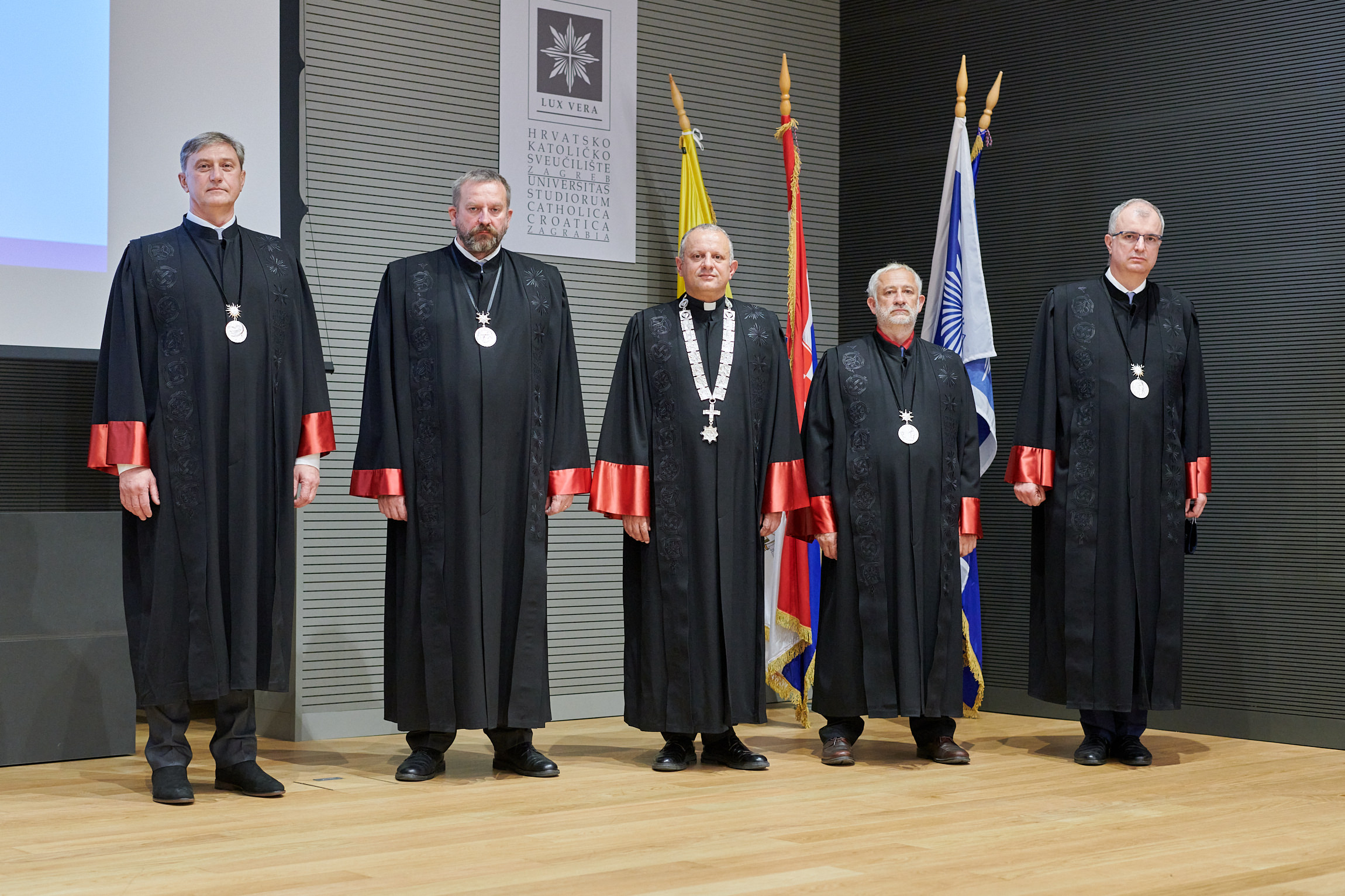 In addition to Rector Tanjić, the leadership of the Catholic University of Croatia includes: 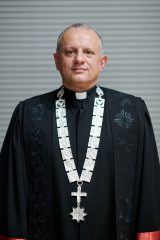 Prof Željko Tanjić, PhD, was ordained priest of the Archdiocese of Zagreb in 1994. He obtained a doctor’s degree from the Pontifical Gregorian University in Rome in 2000. From 2009 to 2011, he was Head of the Department of Fundamental Theology of the Catholic Faculty of Theology, University of Zagreb, and chief executive officer of Kršćanska sadašnjost publishing house. He has been Rector of the Catholic University of Croatia since 2011. He has authored two books and a number of scientific and professional papers in the field of fundamental theology. From 2014 to 2019, he was member of the International Theological Commission.

Prof Hrvoje Štefančić, PhD, obtained a doctor’s degree in physics at the Faculty of Science, University of Zagreb, in 2002. He attended post-doctoral courses at the University of Barcelona. He was employed in the Division of Theoretical Physics of Ruđer Bošković Institute until 2014. In 2012 he joined the Catholic University of Croatia where he served as Vice-Rector for Science until September 2020. He has been a researcher in the fields of high energy physics, physical cosmology and complex systems science. His interest is focused on an interdisciplinary application of the methods and approaches of theoretical physics. In the field of physical cosmology, he has studied the problem of the universe’s accelerated expansion and related issues of dark energy, the cosmological constant and vacuum energy, modification of gravity at cosmological distances and united models of dark matter and dark energy. He has managed and participated in a number of interdisciplinary studies related to complex systems physics, primarily to research of the structure and dynamics of complex networks and processes thereon. He has published multiply cited papers in prominent international journals in the field of physics and related research areas and lectured at a number of international scientific conferences.

Prof Gordan Črpić, PhD, graduated in electrical engineering at Rade Končar Higher Technical School in Zagreb in 1990. He graduated in theology at the Institute for Theological Culture of Laymen at the Catholic Faculty of Theology, University of Zagreb, in 1996, and in sociology at the Faculty of Humanities and Social Sciences, University of Zagreb, in 1997.
He obtained a master’s degree in social sciences, field of sociology, in 2002 at the Faculty of Humanities and Social Sciences, University of Zagreb. At the same Faculty, he obtained a doctor’s degree in social sciences, field of sociology, branch of special sociology, in 2009. His master’s thesis was entitled “The Religiosity of Students in the Republic of Croatia” and his doctoral thesis “The Impact of Religiosity on the Individual and Social Dimensions of Morality in Croatia”.
Until 2014 and prior to joining the Catholic University of Croatia, he was employed at the Centre for the Promotion of the Social Doctrine of the Church of the Croatian Bishops’ Conference where he served as Secretary from 1997 to 2003 and then Head of the Centre from 2004 to 2014 (since 2011 when he joined the Catholic University of Croatia he discharged the office as a volunteer). From 1998 to 2003 he was editor of the social programme of the Croatian Catholic Radio. He is member of the International Society of the Sociology of Religion (ISSR) and the International Study of Religion in Eastern and Central Europe Association (ISORECEA). His name has been entered in the register of scientists and scholars of Croatia’s Ministry of Science, Education and Sports under no. 248676. Part of his papers belong to the interdisciplinary field of sociology, the social doctrine of the Church and social policy, and deal with the topics of poverty, solidarity, voluntariness, subsidiarity, reconciliation and forgiveness as well as other topical social issues. In papers related to this group of topics, Prof Črpić has deliberated on concrete models for change and an improvement of Croatia’s social reality in the context of overall European social processes.

Prof Roberto Antolović, PhD, graduated in 1987 at the Faculty of Veterinary Medicine, University of Zagreb. From 1988 to 1991, he attended doctoral studies at Justus Liebig University in Giessen, Germany, where he obtained a doctor’s degree in 1991 in the field of biochemistry and research into the structure of membrane protein Na+/K+-ATPase, isolation of endogenous cardiac glycosides and their interaction with Na+/K+-ATPase receptor. The next four years he continued working as an assistant in the Institute of Biochemistry and Endocrinology of Justus Liebig University in Giessen, focusing on properties of receptors for cardiac glycosides. In 1995 he went to the Faculty of Medicine in Lausanne as an EMBA fellow on this subject matter where he was guest researcher at the Institute of Experimental and Clinical Pharmacology and Toxicology, University of Lausanne. Using the methods of molecular biology, protein chemistry and biochemistry he researched the properties of receptors for cardiac glycosides and worked on explaining the location of binding sites of cardiac glycosides to Na/K-ATPase. From Switzerland he returned to the post of Assistant Professor C2 at the Institute of Biochemistry and Endocrinology of Justus Liebig University. In 1999, accepting an invitation of Pliva Pharmaceutical Company based in Zagreb he returned to the Pliva Research Institute where he held managing positions for six years in the section of research of new medicines. In 2005, he continued his career in the GlaxoSmithKline Company where he held a managing position in the area of biology on projects of anti-inflammatory medicines and the development of new antibiotics of macrolide class of compounds. After a period of three years in GSK, he transferred to the post of full professor in the Department of Biotechnology, University of Rijeka. In 2016, he joined the Catholic University of Croatia with full professor tenure in the Department of Nursing. Since 2017, he has been President of the Croatian Microbiological Society and on a number of occasions Chairman of organising committees of international scientific conferences. Prof Antolović has received a number of awards for his work and scientific achievements, the more prominent among them being the 1994 Karl Pfizer Award for exceptional young researchers, the 2001 Pliva Annual Award, the bronze and silver medals of GlaxoSmithKline in 2007 and 2008 respectively. Prof Antolović is a member of the board of editors of the journal “Food Technology and Biotechnology”. He has published more than 30 papers in international scientific journals and has co-authored several university textbooks on immunology. He has presented his scientific work at many conferences at home and abroad and has been invited as speaker at 15 congresses. His works have been quoted more than 1000 times to date.