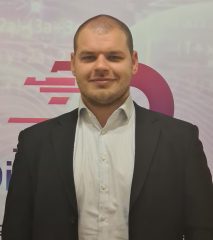 Luka Poslon is a member of the Digit-HeaL research group.

He holds a research assistant position at the Catholic University of Croatia, employed with the support of the Croatian Science Foundation on the basis of the open call”Career Development Project for Young Researchers – Training of New Doctors of Science” (DOK-2021-02-9366). Luka graduated from the Faculty of Philosophy and Religious Sciences University of Zagreb in 2021 with a Master’s degree in philosophy. In his role as Program Director of the World Youth Alliance, he had charge of several international and national projects. He acts as an advisor for youth issues at the Center for the Study of the Relationship between Science and Religion at the Faculty of Philosophy and Religious Sciences, and as a deputy member of the Youth Council of the Government of the Republic of Croatia. Luka authors a bioethics column on the portal mimladi.hr portal.

His areas of ​​interest revolve around the contemporary challenges of bioethics, digital technology and artificial intelligence. Luka was awarded the Viktor Frankl Award as the most outstanding member of the World Youth Alliance in Europe for 2020.